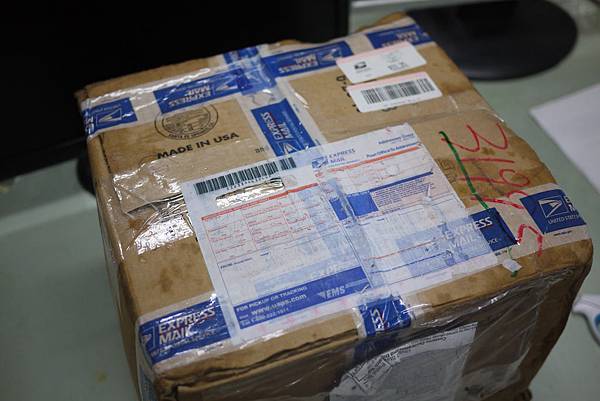 Through a lens, the world sees Taiwan
The Lord of Lenses – The fellowship of the lens

An American photographer saw the article “Nikon Repair Center saves a lens damaged by salt water by boiling it"on Nikon Rumors and got in touch with me, he said that he has a Nikon 200mm F2.0G with the same problem; it was sentenced to death by Nikon. He asked me if I could repair this lens. It was in June 2013.

After several mails contacted, this photographer had every confidence in my abilities to repair it, and sent this valuable lens to me directly. This simply trusts became a powerful motivator for me to repair it.
The package was arrived in the evening on July 15th 2013, it was a raining day. 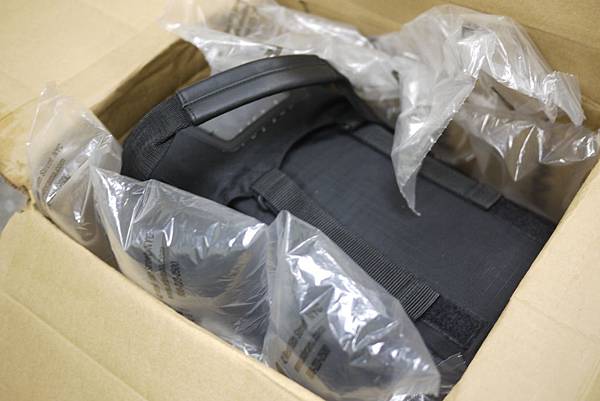 I was so excited, couldn’t wait to open it to check the condition. 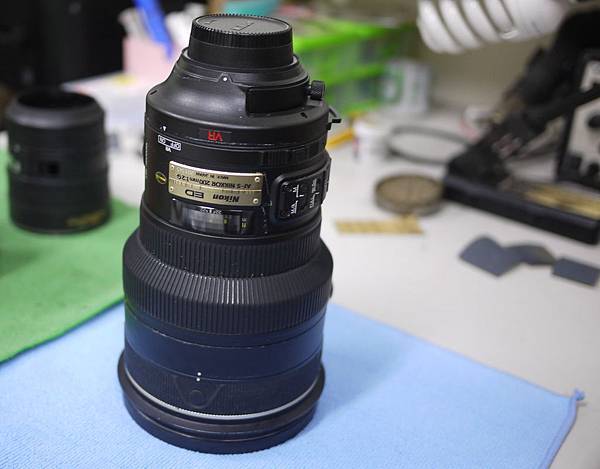 The appearance covered with salt. 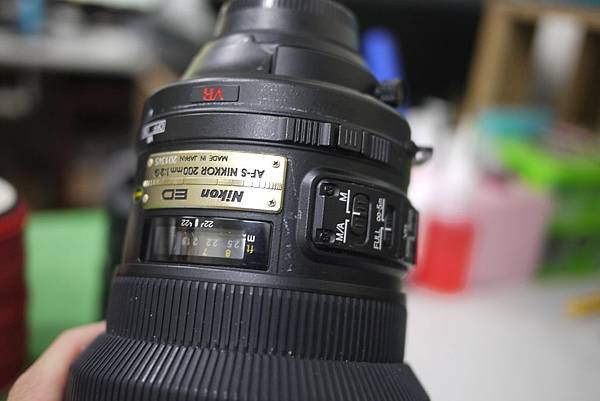 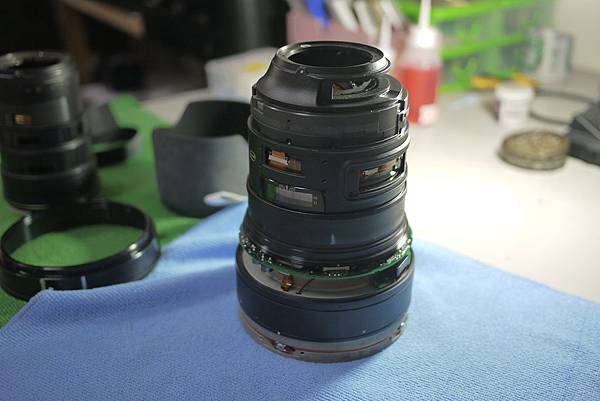 I realized one thing while I started to disassemble it. This lens was completely jammed; I couldn’t remove the lens tube at all, which means unable to repair.

A thought crossed my mind, let’s boil it again! No, on second thoughts, NO! The main circuit board, SWM (Silent Wave Motor) and GMR Sensor were still inside, if I cook the lens, they will be broken. What options did I have? It should have had a better solution to this jammed lens tube, so I published an article “NRC asks for help” on a forum names Mobile01 to seek help. After days’ discussion, I was deeply touched by Taiwanese’s passion and wisdom. Stood on the stage of the world, I felt that I was not alone.

I got a lot of valuable opinions (which couldn’t be found in textbooks) from people of different fields, and those information were incredible professional.You can find this article at http://nrcintw.pixnet.net/blog/post/215331929, but unfortunately, most of responses were missing. You guys made a lot of effort to make this happen; your supports are greatly appreciated. For this reason I am going to share my experiences to all of you.

I adopted one of the safest methods on most opinions, that is Ultrapure water http://en.wikipedia.org/wiki/Ultrapure_water. I would like to thank Mr. Chun-Yeh Chen (a lecturer in Department of Food Science and Technology at Hungkuang University) for explaining and tutoring on this matter. Ultrapure water can remove most conducting medium from water, dissolve organic, inorganic and gases, the resistivity is greater than 18MΩ*cm, so I don’t have to worry about damaging the main circuit board of the lens.

Here came the problem! Where could I get this “holy water”? There is no easy access to it. The only two places that I could think of using ultrapure water are laboratory and semiconductor industry, so I got in touch with WINTEK, a world- leading manufacturer of touch panel and small-to-medium liquid crystal displays (LCD) at Taichung Taiwan, who gave me a helping hand without hesitation. 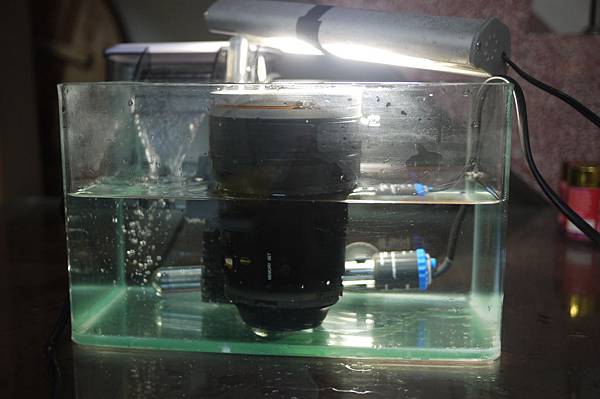 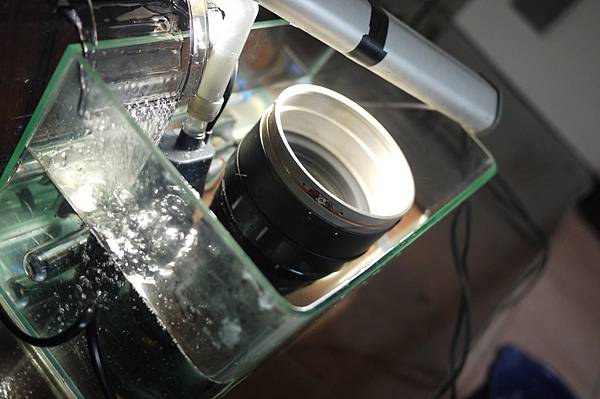 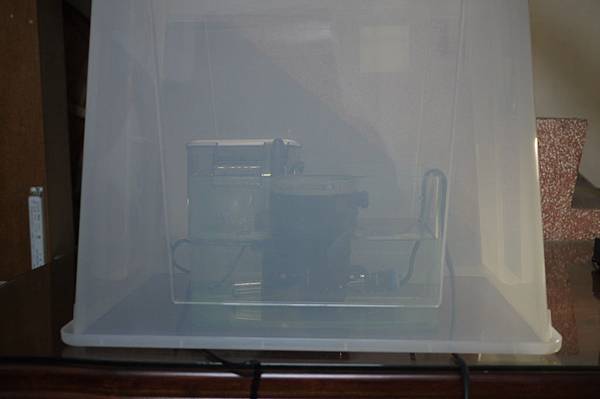 It covered with a huge plastic box. I soaked it and changed water for 3 days in a row. 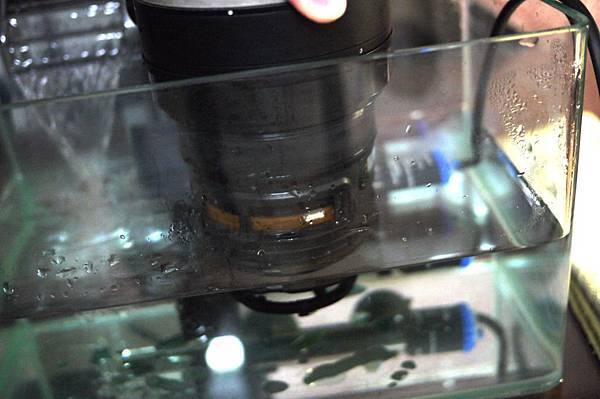 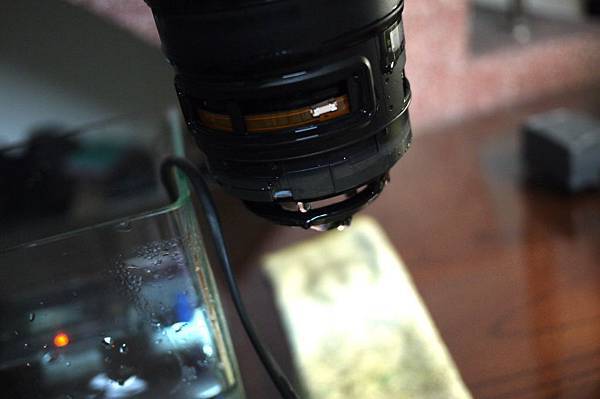 It was still dripping while I took it out of the fish tank. 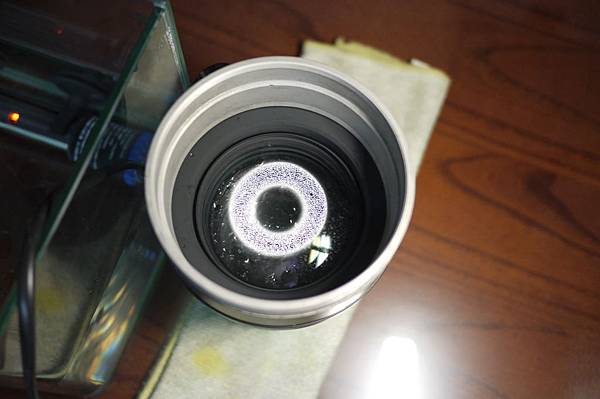 No matter how carefully I handled it, a lethal damage, however, was still unavoidable, which I will explain later on.

I was happy that I opened the 1stlens tube, and…yes, there was another one, it’s unable to open! 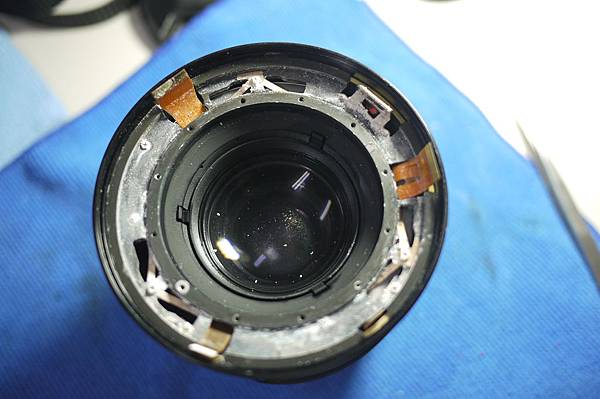 The salt crystals were everywhere inside the 2nd layer of the lens, the crystals and the lens were tightly glued together, which were impossible to separate.

Let’s took a good look on the 2nd layer of the lens tube. 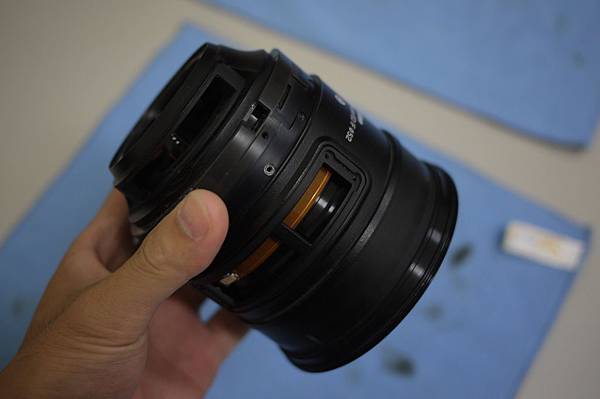 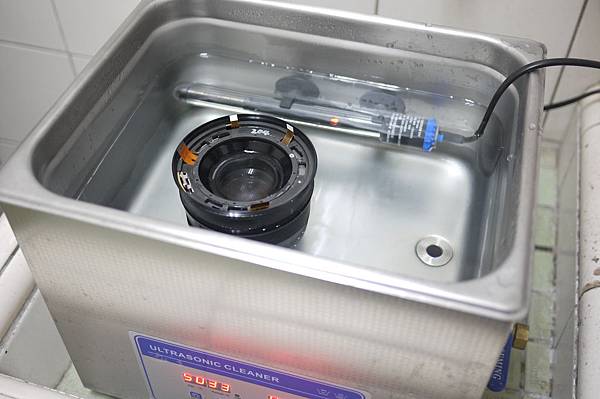 Third, and the last time, Ultrasonic Cleaner + weak acid + thermostat, it’s extremely dangerous as acid will damage the coating of the lens, so, please be careful, do not attempt the technique without consulting a professional.

In certain circumstance, the combination of “temperature, pressure, time and density” will create chemical reaction, which will damage the coating of the lens, but I don’t want that happen. What if I set the density and temperature lower with shorter time? So the effect of chemistry won’t happen…well, in theory, but unless you know exactly how they react with each other and are able to handle them perfectly, otherwise there is no guarantee of success.

I didn’t quite know what to do next. But, I cleaned the 1st layer of the lens tube successfully.

There were bubbles on the water surface, which means it’s working. 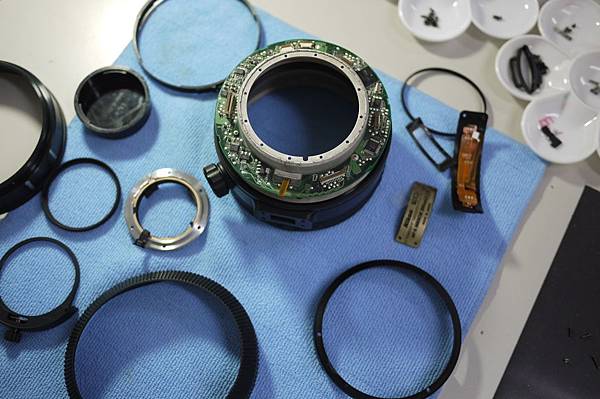 The 1st tube lens was in good shape after cleaned up, but the yellow wire under the lens tube was broken, it’s for the focal length sensor. Oh my god! I BROKE it! The spare parts for Nikon 200mm F2.0G are no longer being produced, you can’t find them anywhere, and not to mention this exclusive part…I screwed up! I was so depressed. I totally betrayed this famous photographer’s trusts!

I assembled the rest parts of this lens after cleaned up to test how badly it was? 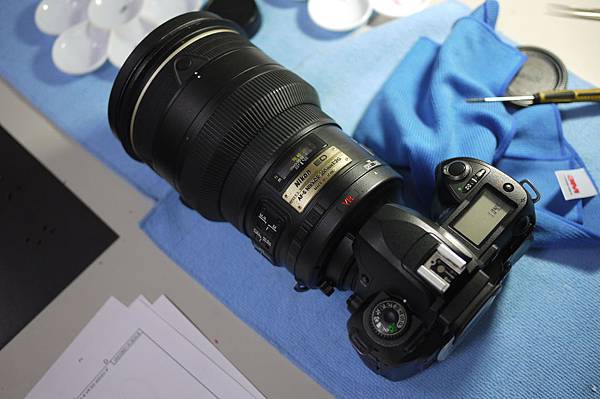 To my surprise, VR was repaired, it couldn’t function properly at the beginning, but now the manual focus is working. But the lens, still not quiet yet! I got frustrated for a while, told the photographer that I failed him, and the only thing I could think of was to visit Nikon Japan to see if they can help.

In Oct. 22nd 2013, I took the lens to Nikon Repair in Tokyo Ginza Japan in person. I still remembered holding an unpublished lens Nikon 58mm F1.4G where you could only see it there on my hand…All right, all right, let’s back to the point!

I got the inspection result within 60mins, super efficient! The answer I got from the technician was the repair cost is almost the same as a new lens NT$140,000 (USD$45000 ). I was very disappointed & left Nikon Repair in Tokyo Ginza. 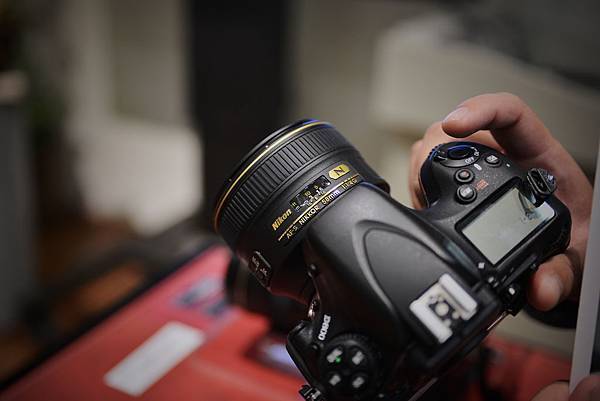 Think back to that day, I felt much calmer, and realized that no one can bring it back to life but me. Yes, it’s me and me only with the simply trust gave by the photographer. I told myself that I can do it.

Especially thanked this Japanese student for her help. 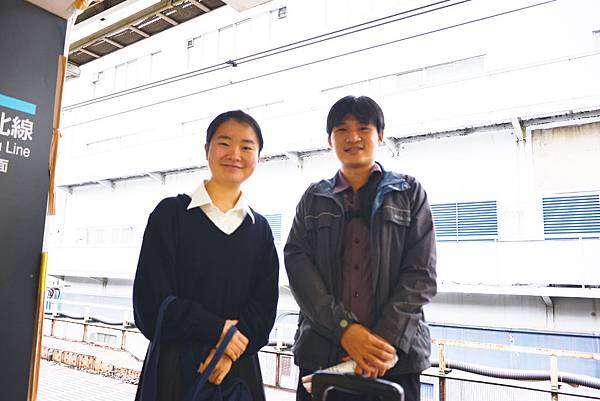 She helped us to get into Tokyo metro while we got lost and accompanied us all the way to our destination. I took a bow to show my appreciation when we said goodbye.

We visited Meiji-jingu before we left Japan, and made our wish 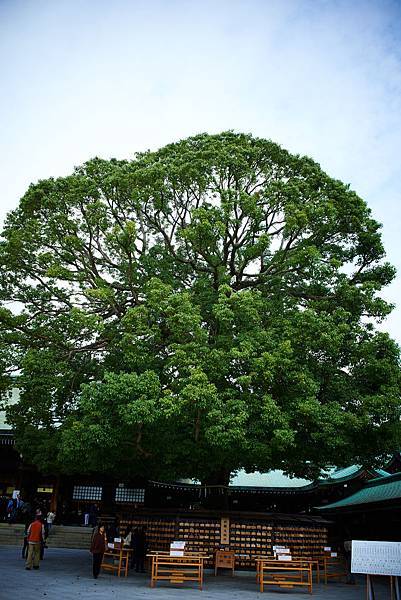 In order to be recognized by god easily, I drew NRC’s QR code 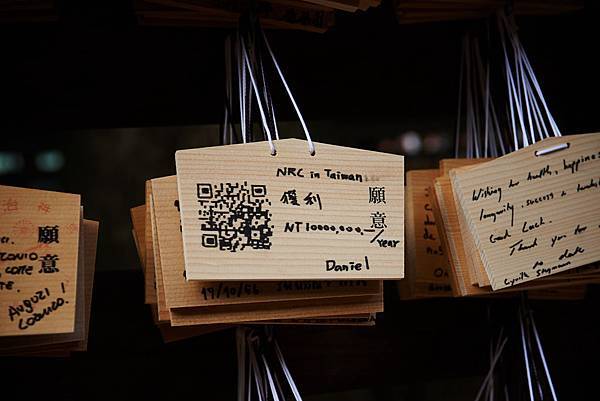 It’s a long story, to be continued…